A paper on  the first survey of the critically endangered Saharan cheetah Acinonyx jubatus hecki was recently published in the Journal PlOS ONE. The study was carried out over two field seasons (August-October 2008 and August-November 2010) in Ahaggar Cultural Park, South Central Algeria by Farid Belbachir and his colleagues.

A rectangular trapping grid was designed and overlaid on a satellite image of the study area using 40 camera trap locations, spaced 10 km apart, covering a total area of 2,551 km2. The survey used camera-traps which use passive infra-red motion detectors that trigger a photograph when animals pass in front of the camera.

Cameras were usually placed under the nearest tree within 1km of each pre-allocated grid point. Trees were selected as they were likely to be attractive to passing cheetah; however they had the added advantage of providing shade for the camera traps, protecting them from the heat of the day.

Of the 32 captures in total, 30 were captured after sunset (range 17:52–19:11 over course of surveys) and before sunrise (06:14–06:56). Nearly half (47%) of captures occurred in the small hours of the morning between 03:00–06:00. Of the two captures during daylight, only one was captured well after sunrise at 09:20, the other was only 12 minutes after sunrise. There was no evidence of captures being linked to the phase of the moon, since nocturnal captures were no more likely during the second and third quarters than from the first and last quarter of the lunar cycle.

The data obtained was analysed statistically and allowed the researchers to determine the abundance, the density and the activity patterns of this cheetah population leading to next conclusions:

The behaviour and ecology of the Saharan cheetah is severely constrained by the harsh desert environment, supporting our predictions that Saharan cheetah are nocturnal; potentially wide-ranging; occur at very low densities relative to cheetah in savannah environments and demonstrates the value of the Ahaggar Cultural Park as a key area for the conservation of the critically endangered Saharan cheetah.

Abstract: Deserts are particularly vulnerable to human impacts and have already suffered a substantial loss of biodiversity. In harsh and variable desert environments, large herbivores typically occur at low densities, and their large carnivore predators occur at even lower densities. The continued survival of large carnivores is key to healthy functioning desert ecosystems, and the ability to gather reliable information on these rare low density species, including presence, abundance and density, is critical to their monitoring and management. Here we test camera trap methodologies as a monitoring tool for an extremely rare wide-ranging large felid, the critically endangered Saharan cheetah (Acinonyx jubatus hecki). Two camera trapping surveys were carried out over 2–3 months across a 2,551km2 grid in the Ti-nhağğen region in the Ahaggar Cultural Park, south central Algeria. A total of 32 records of Saharan cheetah were obtained. We show the behaviour and ecology of the Saharan cheetah is severely constrained by the harsh desert environment, leading them to be more nocturnal, be more wide-ranging, and occur at lower densities relative to cheetah in savannah environments. Density estimates ranged from 0.21–0.55/1,000km2, some of the lowest large carnivore densities ever recorded in Africa, and average home range size over 2–3 months was estimated at 1,583km2. We use our results to predict that, in order to detect presence of cheetah with p>0.95 a survey effort of at least 1,000 camera trap days is required. Our study identifies the Ahaggar Cultural Park as a key area for the conservation of the Saharan cheetah. The Saharan cheetah meets the requirements for a charismatic flagship species that can be used to “market” the Saharan landscape at a sufficiently large scale to help reverse the historical neglect of threatened Saharan ecosystems. 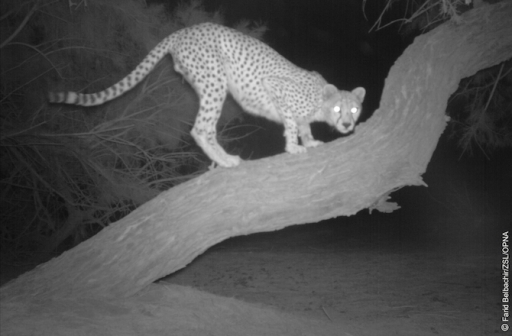 One thought on “Monitoring Rarity: The Critically Endangered Saharan Cheetah as a Flagship Species for a Threatened Ecosystem”